On March 14th and 15th 2015, the Seattle Museum of Flight hosted their second annual Aviation Archeology Symposium. The symposium focused on the recovery of aircraft, archeological aspects of aircraft, in addition to aircraft restoration. The symposium this year included many presenters from last year’s symposium, as well as some new additions. Dave and Lindsey Goss were returning presenters for this event.

This year Dave and Lindsey’s presentation focused on challenges and decision making during a restoration. Restoration of an aircraft can go down several different paths, depending on what the customer wants. For some aircraft owners original, airworthy, or a combination of both is the desired way to go. Although being original is very important to some owners/agencies, restoring an aircraft to original standards can present the most challenges. In the presentation we looked at examples of challenges faced, and the different kinds of decisions that need to be made during restoration. We also talked about some of the current projects in the GossHawk shop.

This event is always an exciting one for Dave and Lindsey because it allows them to visit with industry friends in the area, but also allows them to visit the collection that is so near and dear to their hearts. The majority of Champlin Fighter Collection is now housed in the Personal Courage Wing at the Seattle Museum of Flight. Dave was involved in the majority of these airplane restorations and maintained the collection for many years; Lindsey grew up with all of these beautiful airplanes. It is always great to see the staff at the Museum of Flight, Dave and Lindsey are very appreciative to JD and Cale especially for allowing them a little extra time to visit with the planes that they once cared for.

Below are some pictures of Dave, Lindsey, and friends at the symposium, the aircraft in the Champlin Collection, and a video of the presentation given by Dave and Lindsey. 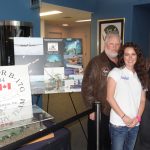 Bob Mester (left) and Mark Allen (right) of Underwater Admiralty Sciences stand next to their display with Lindsey. 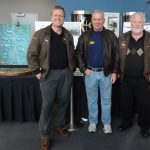 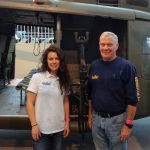 Lindsey and Dave stand with the Huey that is on display at the Museum of Flight. 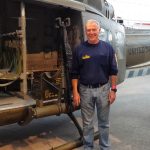 Dave stands next to the position in which he used to fly during his time in Vietnam. 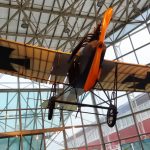 The German Rumpler Taube hangs from the ceiling at the Seattle Museum of flight. This is one of the aircraft from the Champlin Collection; this is also one of the examples discussed in the presentation. 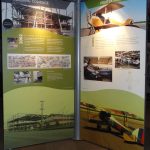 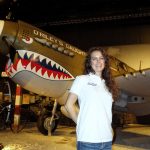 Lindsey stands with the P-40 “O’Riley’s Daughter” from the Champlin Collection, her favorite airplane in the Champlin Fighter Museum growing up. 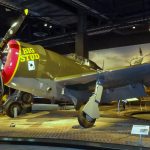 The P-47, “Big Stud”, another beautiful airplane from the Champlin Collection. 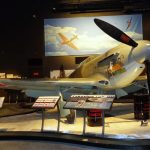 The rare Yak-9U from the Champlin Collection. 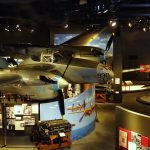 Heading up to the second floor of the Personal Courage Wing, you get a great view of the WWII aircraft. The P-38 was another plane in the Champlin Collection, and the paint scheme honored Fighter Ace Captain Jack Purdy. 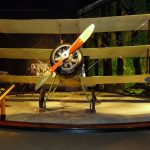 The second floor houses the WWI airplanes. This is the Sopwith Triplane from the Champlin Fighter Collection. 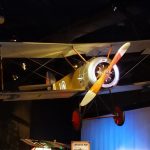 The Sopwith Pup of the Champlin Collection hangs from the ceiling. 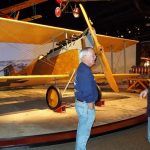 Dave and JD stand in front of the Aviatik, also from the Champlin Collection. Dave tells JD some of the details of restoring this aircraft to an airworthy condition, all the way to getting an airworthiness certificate. When it came time to run the airplane, Mr. Champlin said no. He never intended to fly her, but did not want corners to be cut during the restoration. She was too rare to risk the chance of losing her. 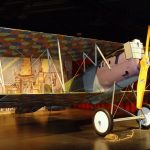 Another WWI airplane from the Champlin Collection, the Pfalz D.XII. 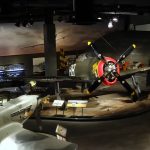 Another view of the first floor of the Personal Courage Wing. 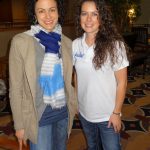 Lindsey even had time for a quick cup of coffee with Melinda Davies, who helped design the new GossHawk website a couple years back.